Lloyds Banking Group plc Archives – Edinburgh
Example: conservation of 2 volumes: complete dismantle, part aqueous treatment. 2014
The client’s priority was the preservation of the written information contained in these 18th century bound manuscripts. The collection had previously been surveyed and earlier examples had been conserved in full, including their bindings. The budget for the current project required a different approach. The following parameters for minimal treatment were agreed: the bindings would be documented (digital images). As the bindings were contaminated with mould, distorted, damaged and weak, they would be removed from the text block and discarded. The text blocks were also found to contain mould and were therefore disbound and mechanically cleaned in a fume cupboard. Part of the text block was also cleaned aqueously and re-sized (application of gelatine solution to re-seal the surface of the washed paper). The folios were repaired using a reversible technique and archival materials. The text block folios were placed into their original order and returned to the client. The studio also provided exact measurements (using a book measuring device) to enable the client to order made-to-measure archival boxes. The boxed text blocks will be stored horizontally.

ROE – Royal Observatory Edinburgh – Crawford Collection
Example: conservation of 2 early printed books, structural repairs. 2014
The two volumes are printed books on paper dating from the late 15th and early 17th century. The client requested the books to be conserved for safe display in an exhibition. Both bindings were damaged. The text block (folios) appeared undamaged. The bindings were not original (not contemporaneous with the text) and were applied to the text block with little care. This resulted in stresses in and damage to the binding and sewing structure and physical damage to the section spines (paper damage). The books were dismantled, cleaned, all spine folds were repaired, sections re-assembled and re-sewn using a flexible, strong method. The text blocks were re-bound into their current bindings. The spines were re-backed with toned material. As the books were light and slim, toned Japanese paper was used instead of leather.

Historic Scotland – Trinity House Edinburgh
Example: surveying of collection in historic original location, development of treatment proposals and cost estimates, conservation of select volumes. 2012-13
The project included the surveying of a small collection held in its historic original location. The survey highlighted the need for conservation and allowed targeting of important and damaged volumes in the first phase of the conservation project.
Volumes of the collection dated from 18th to 20th century and were bound in a variety of styles and materials. All volumes were printed on paper, some with illustrations.
The client was provided with a detailed survey assessment report. The client developed a priority list and BACS Ltd supplied individual treatment proposals and cost estimates for these books.
All books were documented (text and digital images) and cleaned prior to conservation.
Conservation work included in-situ repairs to the bindings and text blocks, as well as interventive conservation of the some book structures (binding and sewing structural repairs).
Books were returned to their original location. The second conservation phase is ongoing (2014).

University of St Andrews Library, Department of Special Collections – 2012-13
Example: Separation and conservation of 15th century printed music sheets forming part of an early 17th century binding on a 16th century book.
The volume came to the attention of the client when a board corner became delaminated and revealed early music printing. The challenge was to detach the boards from the otherwise undamaged book (a rare 16th century book on architecture). The covering (leather) needed to be lifted and the boards separated into their component folios.
After tests and thorough examination and documentation of the binding structure, the boards were successfully removed by undoing the lacing. The text block (folios) and its sewing structure remained undisturbed. The boards were carefully delaminated revealed 28 sheets of early printed music. These were gently flattened and placed in melinex sleeves (archival polyester sleeves).
The text block was re-bound. The original lacing (parchment sewing support slips) were sandwiched into new split board, new endpapers were added, the book was covered in new, toned leather and the original leather was applied on top (on-lay). All materials used and added were of archival quality and the treatment was documented (digital images and report, including handling guidelines).
The book and the separated folios were housed in custom made archival boxes. 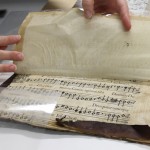 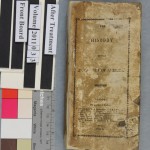 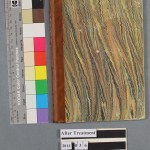 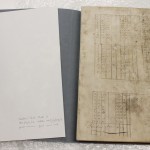 Warning: count(): Parameter must be an array or an object that implements Countable in /home/public/wp-includes/class-wp-comment-query.php on line 405